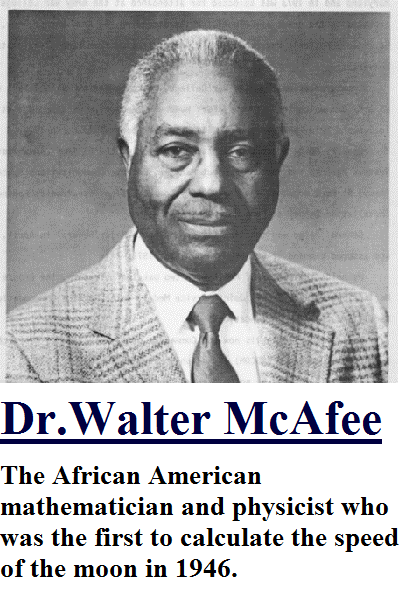 Walter Samuel McAfee was born September 2, 1914, in Ore City, Texas. He was born to Luther and Susie McAfee. His father was a mechanic and his mother was an educator. His parents’ lines of work both influenced his career later on in life.
After high school, McAfee enrolled in courses at Wiley College in Marshall, Texas. He majored in Mathematics and earned his B.A. degree in 1934. In 1937, he earned his M.S. from Ohio State University. Once he graduated from college, McAfee began teaching math and biological sciences at a junior high school in Columbus, Ohio. He met a fellow teacher at the same middle school named Viola Winston. They got married in the early 1940s.

In 1942, McAfee joined the United States Army Signal Corps Engineering Laboratories at Fort Monmouth in Belmar, New Jersey. His knowledge about math afforded him the opportunity to work on the Project Diana team. Project Diana was a collaboration of engineers and physicists who studied Earth’s relationship to the moon. Using radar signal echoing, McAfee determined the theoretical calculations of the moon. Those calculations included radar cross-sections, coverage pattern, and distance of the moon. The team received echoing signals between the Earth and the moon in January of 1946. Thanks to McAfee’s contribution, Project Diana was a success. However, he was not recognized for his work until several months later. After the success of Project Diana, McAfee received the Rosenwald Fellowship. He then entered a doctoral program at Cornell University. He earned his Ph.D. in Physics in 1949. His primary focus was on nuclear collisions. While in school, he worked under the advisement of Hans Bethe who was known for his work with nuclear physics. After earning his Ph.D., McAfee returned to the Army. He made significant contributions to the study of nuclear weapon systems. He also assisted with satellite technology. McAfee continued working as a scientist at Fort Monmouth laboratory for the remainder of his career. He worked for the laboratory for 42 years. Over the span of his career, McAfee received awards and fellowships in honor of his work. Wiley College inducted him into the Science Hall of Fame. Dr. Walter McAfee died February 18, 1995. He was posthumously honored when the U.S. government established the McAfee Center at Fort Monmouth, a facility which contains the Information and Intelligence Warfare Electronic Directorate.

Taylor Denby demonstrated INTEGRITY when he notified her teacher that he had given him an extra point in the assignment by mistake.

Interested in running for a Student Council Officer (President, Vice-President, Secretary, Treasurer, PR Rep) position?  The officers’ election date is March 13th. Campaigns open Friday, March 1st. Candidates must attend a mandatory interest meeting on February 27th at 7:45 am or February 28th at 3:15 pm in room 703. Speeches are due by 3 pm on March 11th.

As always, all campaign materials must be approved before they are posted, and any social media campaigns must be public.

Students interested in running for next year’s Honor Council should speak with Dean Booker or Ms. Lineberger.  The Council will be seeking 1 rising 10th, 1 rising 11th, and 3 rising 12th graders. Speech submissions are due by February 27th at 3pm.

$5 for Day of Service and Student Hunger Drive: Students may dress down on Today and Tomorrow for $5.  Money goes to support community outreach.

Hello fellow students! Book Club will be doing a book drive for our service project this year. We have partnered with Big Brothers Big Sisters and they are looking for books from Lower to Middle School age range.
Please bring in any Children’s or Middle School age books you no longer need between now and February 22nd!
There will be boxes placed at each entrance of the school.
Thank you for your support!
-Rachel Cooke

Seniors, Juniors and Sophomores are invited to sign-up on Naviance Student to visit with College Admission Representatives coming to Cannon School.  Students must get permission from their classroom teachers prior to attending an admissions event. Log into your Naviance Student account to learn more about the colleges, find out visit times and register to attend. Visits will be held in The Cube or College Counseling OfficesMarch 5th: Savannah College of Art & Design
March 15th: Drexel University
March 25th: University of Alabama; Huntsville
March 29th: Gardner-Webb University
April 11th: UNC Wilmington